“Getting your hands on the extremely aesthetic lines created by great mountaineers of the past such as Detassis, Graffer, Castiglioni, Maestri, Aste etc. can offer a day difficult to forget.”

The Brenta Dolomites mountain range is the only dolomite island west of the Adige river bordered to the west by the Val Rendena, to the north by the Val di Sole, to the east by the Valle di Non and the Paganella plateau and to the south with Valli Giudicarie.
Compared to many famous Dolomite groups, such as the Sella, the Tre cime di Lavaredo or the Falzarego, the dominant characteristic of Brenta is its isolation and wild nature. Climbing in the Brenta Dolomites you will never see a bunch of bikes racing beneath you or bump into some big crowds, because no road passes through the heart of these mountains. Personally, I love the “isolated” aspect of this group, comparable to some areas of the Agordine Dolomites and the Pale di San Martino. 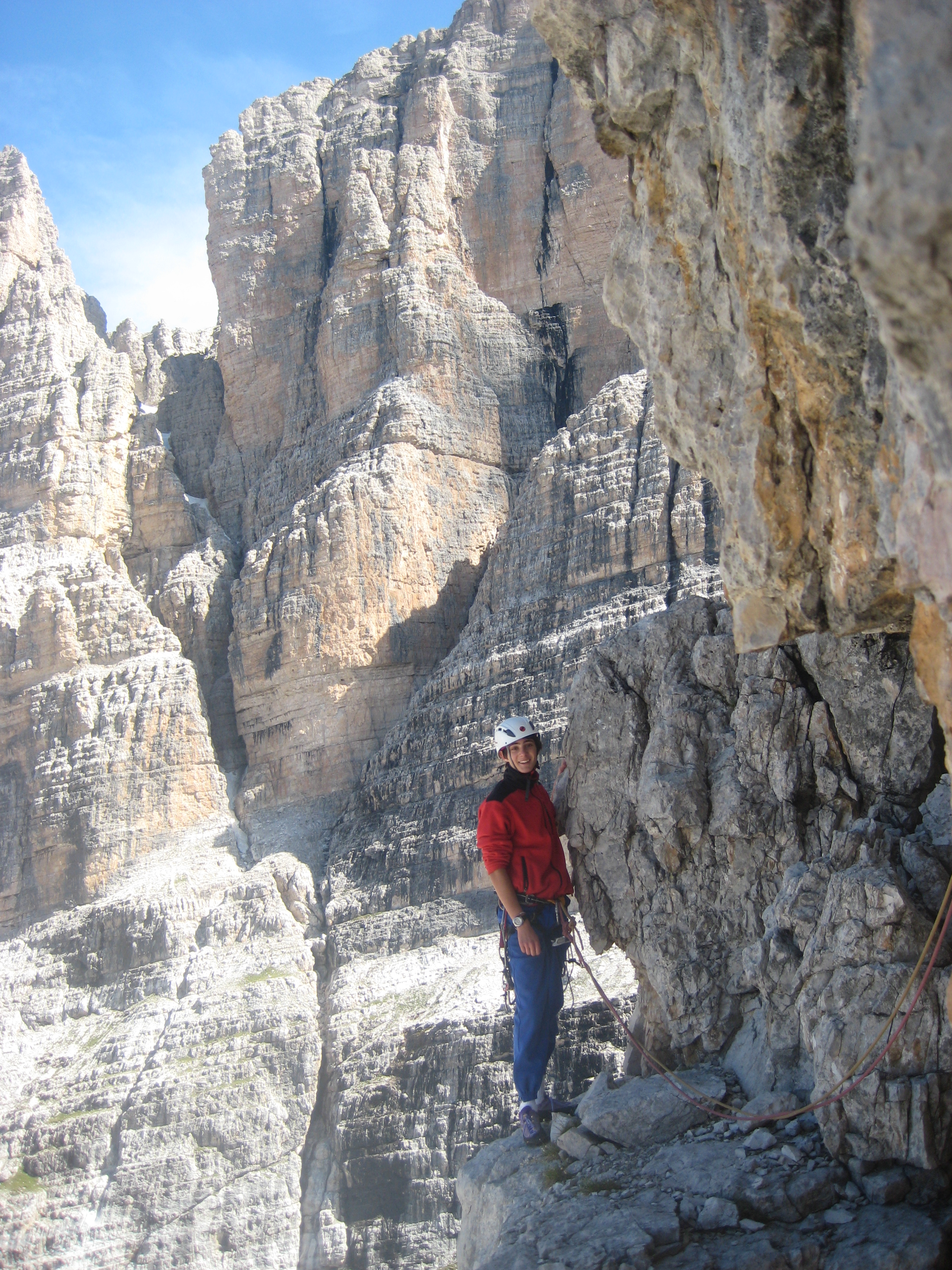 The group, about 40 km long and 12 km wide, can, in turn, be divided into minor subgroups: to the north the Sassara – Pietra Grande range, where the rock is not the best but there are some very interesting ridge routes. To the east Campa and Croz dell’Altissimo, the latter with its infinite south wall, more than 1000 meters high. To the south there is the Cima Tosa massif (the highest peak in the all Brenta group, 3159m) which perhaps holds the most beautiful routes such as the very classic Via delle Guide on the Crozzon. Then we have the Ambiez, where we find the most beautiful rock of the group and innumerable classic and sport climbing routes and last, but not least, the Ceda peaks.
In the center, in addition to the Sfulmini, the Grosté and the Massodi, there is the massiveness of Cima Brenta with its characteristic hanging glacier, now unfortunately getting smaller every year. Here there are the iconic peaks: the Campanil Basso, the Campanil Alto, the Castelletto and many others.

The Brenta Group, characterized by limestone from the noricum-rhaetian age, is essentially composed of dolomite (sedimentary rock formed by double calcium carbonate and magnesium) although in some areas there is no lack of gray limestone, like that of the Marmolada; examples are the Tosa’s subgroup or the Agola peak.

In the summer of 1864, English hikers-explorers made the crossing of the Brenta Group from Molveno to Madonna di Campiglio, giving way to the mountaineering exploration of the Dolomites. To remember in particular John Ball, Douglas William Freshfield and Francis Fox Tuckett. Since then, with exploratory mountaineering first and sport climbing then, the routes forged are innumerable.

From the normal routes to the extreme sport climbing routes, the Brenta Dolomites conserve an incredibly historical mountaineering heritage, capable of giving strong emotions. Getting your hands on the extremely aesthetic lines designed by great alpinists of the past such as Detassis, Graffer, Castiglioni, Maestri, Aste, etc. can give you a day you’ll hardly forget.

Following are some emblematic itineraries that I propose to you.

Castelletto Inferiore is one of the most appreciated and popular mountains in the Brenta Dolomites. Relatively comfortable access, proximity to the Tuckett refuge and its sunny wall have always made it the climbing school for generations of Dolomite climbers.

Normal route from the south 270m 2º/ 3º
It is a beautiful climb on excellent rock, with rather limited difficulties and therefore perfect for those approaching multi-pitch climbing for the first time (or at least for those with little experience) in the Dolomites. It can also be tackled by those who have never climbed before, but it is better not to suffer from vertigo!

Here you can see a beautiful video of the climb shot by the poetess Antonia Pozzi with the guide Pio Ferrari.

Gasperi edge / Via Sybilla at Castelletto di Mezzo 4+°
Both great classics, difficulties begin to be felt, the verticality increases and the grade stands at 3+ with moves up to 4+. Those ways are however suitable for beginners and/or for teaching climbing techniques. 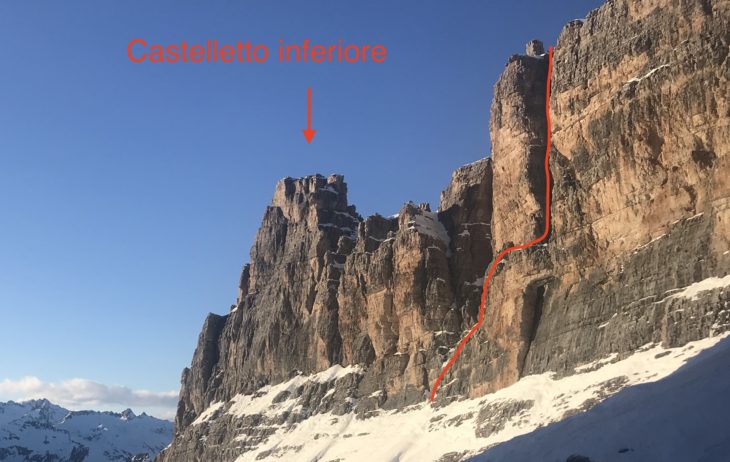 Meeting with the guide at the Grostè cable-car station, Madonna di Campiglio. Once arrived with the lift on the Grostè plain, we’ll take trail n. 316 which, in about 45 minutes passing under the steep and beautiful west walls of Castello di Vallesinella, leads to the Tuckett refuge.
Even though the access is not the most demanding, you are in the heart of the Brenta and it’s an absolutely isolated and beautiful spot. After an inevitable coffee break at Tucket, the wall is just five minutes away and it’s already time to get all set for the climb. One pitch after another and the top is right there, there will be then the possibility to practice with the abseiling technique, going down on the opposite face (N). Once back with your feet on the ground, instead of returning to the cable car, we’ll go down to the Casinei refuge and then Vallesinella, thus closing a nice loop. From here with comfortable bus-shuttle back to the car.
Note: climbing Castelletto is also very suitable in the months of June and September / October.

Corna Rossa is a set of towers of excellent dolomite that from the edge of the rocky meadows of the Grostè plain drops vertically to the south with numerous walls, generally not too high, ideal for a half-day of climbing. It could be somehow compared to the five towers of the Brenta.
There are both classic and sport routes, among which stand out: 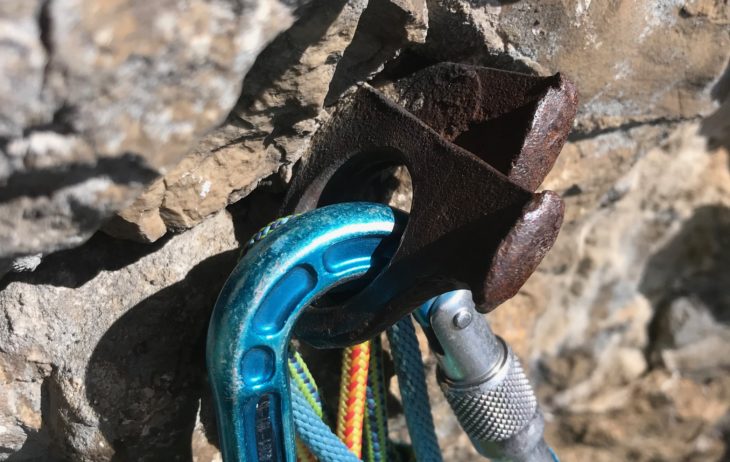 The most frequent question from a localist who climbs to a climbing newbie is “have you done the ‘Basso’?”. If the answer was no then the interlocutor would consider you very little.

This is just to give an idea of how important “Il Basso” is in the environment of the Trentini (people from Trentino) climbers, a real “icon” that has earned over the years the reputation of one of the most beautiful mountains in the world.

These are the main reasons to dream (and to try) to climb this peak:

The program envisages reaching Brentei or Pedrotti refuge the evening before the climb, to get up at dawn and soon reach the foot of the wall, climb the chosen route and then go down to the valley floor.

Some inevitable pearls of this mountain:

All activities: Climbing on Multipitch routes