The Brenta travers: on the trail of the Pionereers

A crossing along the great normal routes of the Brenta Dolomites.

This unprecedented proposal provides for a traverse along the most beautiful and emblematic normal routes that will take you on the main peaks in the Brenta Dolomites.

Day 1 The first day we will leave at dawn with a four wheel drive taxi that will efforthlessly bring us in the heart of the steep Val d’Ambiez, in order to start walking from Cacciatore refuge.
In a couple of hours walking we will be standing at the feet of Cima d’Ambiez 3103m, where the climb of the normal route on the south face, a 2nd-3rd degree route about 600m long, begins. The journey continues descending with many short rappels facing north untill we reach the notch that separates us from Cima Tosa called Bocca d’Ambiez.
Crampons on to cross the small glacier and down to the Agostini refuge, which will be ready to welcome us for the first night.

Day 2 Once back to Bocca d’Ambiez we will embark on the via MINGOTTI to the Cima Tosa 3173m, a logical 700-meter route that with moves up to the 2nd degree and a lot of short rope party leads directly to the top of the queen’s peak of Brenta group. Here the view will reach the whole massif and the nearby Presanella, popping up beyond the Rendena valley. It is not uncommon to use crampons in some sections. The descent will be along the “via del camino” on the east face, the classic normal route that with just a couple of short abseils will leave us a short distance from the Tosa refuge, where we can have lunch. We will then continue along the unbeaten Spellini path which with a wonderful view of the imposing east face of the Brenta Alta peak will take us to the “bocchetta di Molveno” notch and shortly to the Rifugio Alimonta (2580m). 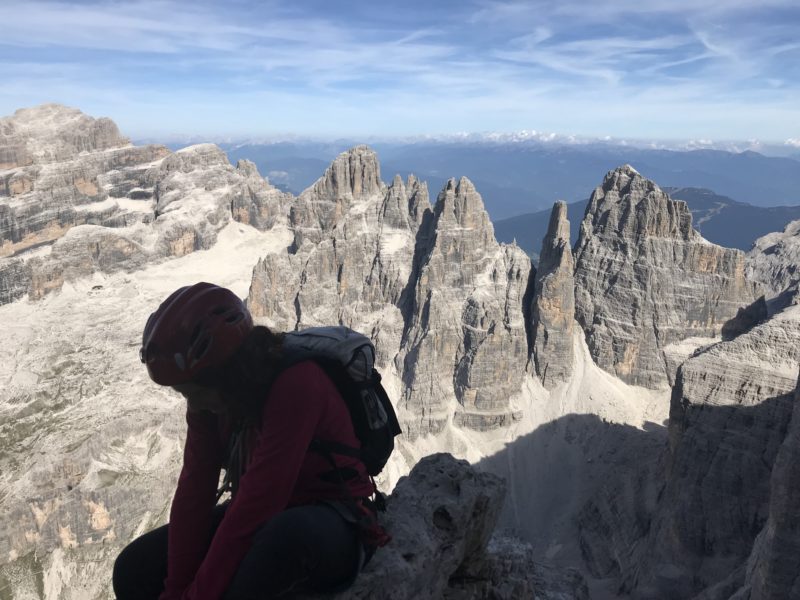 Day 3 By slightly losing altitude and passing under the “twins” in the direction of the Brentei refuge we will arrive at the beginning of the normal route from south to the Cima Brenta 3150m.

It is a very articulated route, long but with very few demanding moves, always in the order of the 2nd degree. From the top of Cima Brenta the easiest descent is on the normal route on the east face, arriving at the Cengia Garbari along the famous via ferrata of the Bocchette Alte. Along the latter we will reach the Bocca di Tuckett where the ferrata will link up with the Benini path, another classic via ferrata that will take us to the Grostè plain through the shortest way. Overnight stay at Stoppani refuge.

Day 4 The most spectacular, long and aerial stage will probably be the latter, which involves crossing the Pietra Grande and Vagliana peaks, two little-known mountains (because of their technical requirement), located on the north edge of the Brenta group. Much of the progression is done with short rope party, with some short pitches and few abseils.

Requirements: Obviously it is a path reserved for mountaineers with experience and training on this type of terrain, where more than great climbing skills, walking training and an “expert foot” are required. The pace will not be exausting, as well as the climbed meters per day, the gruop can be made of two or three (maximum two climbers and a guide).

Variation to the previous program designed for demanding climbers, trained and looking for a more “aerobic” journey.

Day 1 Ascent of Cima d’Ambiez from the normal route from south and descent on the north face to Bocca d’Ambiez, ascent of the via Mingotti to the Cima Tosa, through acrobatic crests and towers that lead to the top of the remote and massive Crozzon di Brenta. Bivouac at the top in the legendary tin box dedicated to Castiglioni. The Crozzon is the highest and most remote peak of the group, a giant defending the Brenta valley which is mostly reacheble only by 6th-grade routes that climb the east wall. The normal route is adventurous and extremely scenic. running along a complex system of ledges and towers with many exposed parts and pitches up to the 3rd degree. The recent re-nailing with resin bolts has simplified the itinerary a lot both from a safety point of view and orientation, but it remains a path of serious commitment, also considerating the length and the lack of escape routes.

Day 2 Return to Cima Tosa and descent through the normal route along the “s-shaped chimneys”. After a short break at Rifugio Tosa we will continue to Bocchetta di Molveno along the Spellini path. Climb the Torre di Brenta in the afternoon on the normal route from north, an itinerary on beautiful rock up to the 2nd degree with a sequence of 3rd, 400m long and little frequented. Overnight stay at the Alimonta refuge.

Day 3 Losing a little altitude, we will go to the attack point of the rocky castle which represents the south face of Cima Brenta, which we will climb along the logical system of ledges that a good climber can spot even in the middle of this steep terrain. Descent from the normal route on the easr side to continue along the Benini path up to the foot of the Grostè peak. A rapid climb from south and a descend towards north will leave us on the Grostè plateau near the Stoppani refuge.

Day 4 Traverse of Pietra Grande and Vagliana peaks along the Oreste ridge.